There are many significant individuals buried in the Kirkyard. From time to time we intend showing some of these and telling a little of the story of the person commemorated.

This picture shows the memorial to Captain William Penny. He was born into a whaling family in 1809 and had started working for his father by the age of 12 and continued in the trade for 47 years. He died in Aberdeen aged 82 years. He was something of a pioneer, being an early enthusiast for the use of steam rather than sail. His crew were less keen and threatened to tar and feather him!

The memorial records ‘Arctic explorer who assisted in the Franklin expeditions of 1850 and 1851’. In addition to being a whaler, Penny was an explorer of the seas off the Canadian Arctic Territories, where the Penny Strait is name after him. He is said to be the first explorer to see the open Polar Sea (Arctic Ocean) to the north of the Penny Straits. Sir John Franklin was another arctic explorer who had attempted to penetrate Lancaster Sound in 1845 in search of the ‘North-West Passage’, but never returned. The Admiralty organised a search for Franklin. It was Penny who, in 1851, found traces of Franklin’s winter quarters on 1845-6 on Beechey Island. The mortal remains of Franklin have never been found, although he seems to have died in June 1847. There is more information about Captain Penny in the Aberdeen Maritime Museum. 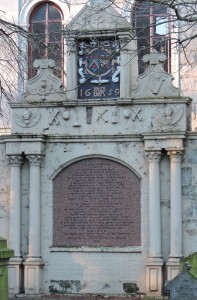 Dr William Guild, born about 1586 was the sole surviving son of Matthew Guild, a wealthy Aberdeen armourer and member of the Hammerman Trade. He studied at the newly founded Marischal College and was ordained to Kinedward parish in 1608. He was appointed one of the ministers of St Nicholas in 1631 and two years later purchased the chapel and monastery of the Trinitarian friars to be a meeting place for the seven Incorporated Trades and a hospital or home for decayed tradesmen. In recognition of his generosity Dr Guild was appointed their first Patron – an office which continues to be held by a minister of the Gospel. The name, Trinity Hall, used also for subsequent buildings in Union Street and in Holburn Street, commemorates its origins. He himself is commemorated by the modern-day Guild Street. In the seventeenth century various public bodies, including the Trades, had seats or ‘lofts’ in the Kirk on which were displayed their insignia. A 20th century panel adorns the loft front of the Incorporated Trades and there the principal office bearers sit when they come to be ‘kirked’, according to long-standing custom, on the 2nd Sunday of November. His large and impressive memorial, shown in the photograph, was erected by his widow and is located in the Kirkyard on the wall just to the north of the gateway from Back Wynd. The original Latin inscription panel was replaced in 1883, in red granite, by the Incorporated Trades.