Sir Alexander Anderson had a long and full life, being successful in many fields of endeavour. He was born on 10th June 1802 in Strichen to the Rev Alexander Anderson and his wife Helen Findlay. He was brought up in the manse in Strichen. His education was at Aberdeen Grammar School and Marischal College in Aberdeen, where he graduated MA in law in 1819! His apprenticeship was served in Aberdeen and in 1827 was admitted to the Society of Advocates. He formed a partnership with William Adam to create the law firm of Adam and Anderson. This was probably the best known law firm in Aberdeen of that time and Alexander was the senior partner. Amongst his early achievements was the reorganisation of the Aberdeen Dispensary (originally founded in 1781 and which later developed into the Maternity Hospital) and he became its treasurer for 32 years. He promoted Aberdeen Fire and Life Assurance in 1836, which evolved to become the Northern Assurance Company in 1848. Their offices at No 1 Union Terrace are a major granite feature at the junction with Union Street. He was involved in a large number of other projects in the city including the North of Scotland Bank, the Aberdeen Market Company, a number of gas and water undertakings and the City of Aberdeen Land Association. He was also pivotal in the creation of the Great North of Scotland Railway (GNSR), the inaugural meeting being held in the offices of his company. His ability to think clearly enabled him to guide the planning processes for GNSR, particularly the routes to follow, at a time when ‘railway fever’ was at its height and often led to financial disaster. This was avoided with the GNSR, although Alexander did have some other unfortunate financial ventures, such as the Illinois Investment Company and the North Bank, both of which failed with substantial losses being incurred.

In 1859 a whole new chapter in the life of Alexander Anderson started when he was elected Lord Provost, a role he filled until 1866. He was knighted on 13th October 1863 on the occasion of the unveiling of the statue of the Prince Consort by Queen Victoria. It was during his time as Lord Provost that the City Council created a new water supply, built a new sewerage system and acquired the legislation to build the Town and County Buildings in Castlegate. One historian has suggested that he single-handedly ‘projected Aberdeen into the modern age’. Quite an accolade. 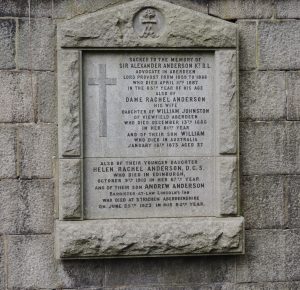 He died on 11th April 1887 just a few months after his wife. His gravestone, which also includes his wife and other members of the family, is on the Back Wynd wall of the graveyard at the Kirk of St Nicholas. There is also a white plaque to him, not accessible to the public, on the North Pier light at Aberdeen Harbour – he had been involved in the extension to the harbour as well!