In an earlier post (on 1st June 2104), we showed what had happened to one of the decorative bosses in the gallery of the former East Kirk when wet rot had destroyed the strength of its internal wooden structure. No-one was hurt when it crashed through the floor overnight, but there was concern about the safety of all the other decorative bosses, so they were carefully checked. One was found to be loose, so the decision was taken to carefully remove it. The first two pictures show an intact boss and a close-up of what remained after it had been removed. This was in an area which had already been treated for dry rot. On looking inside the small opening of the corbel, there was some concern that there could be some dry rot inside the plasterwork – but it was not possible to see enough to be sure. Complicating the matter was that nothing was known about the internal structure of the corbel. Obviously there would be structural wooden beams, which were supporting one of the main roof beams. If there were dry rot it could rapidly destroy the strength of the wood and so potentially cause a partial or total roof collapse.

The decision had to be taken to remove all the decorative plaster from this corbel so that any necessary treatment or replacement could be carried out. However, before this could be done, it was necessary to install some scaffolding to support the roof beam, just in case the wood had already lost its strength and it was only the plaster which was supporting the roof beam. Fortunately it became obvious that there was no dry rot, which was a great relief! Removing the plaster also revealed the internal structure of the corbel. This showed only two support timbers, resting on a stone protruding from the wall. One timber was vertical (the king post), whilst the other went up at a steep angle, far more steeply than the decorative plaster work would have suggested. The final photograph shows the exposed wood inside the corbel (with the support scaffold still partially in place). All the plaster was removed carefully and kept, so that it will be possible to reinstate the corbel when the interior build takes place, either using plaster or fibreglass. 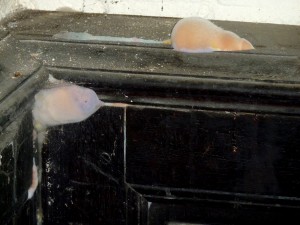 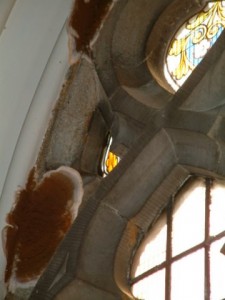 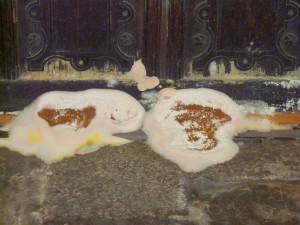 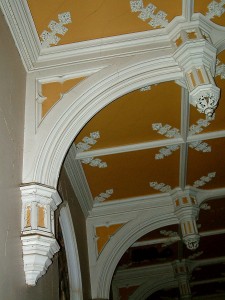 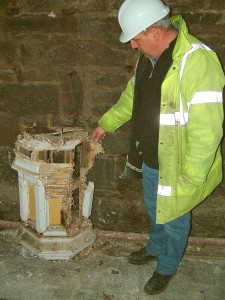