The pelican is an ancient symbol in Christianity. It was first recorded in a book, Physiologus, in Alexandria in the 2nd century. The mother pelican is purported to pierce its own breast to feed its chicks if other food is scarce. Over the centuries this sacrificial giving has been used in the Church to symbolise the sacrificial giving of Jesus Christ in dying on the cross. In some churches it is also used to signify the act of Holy Communion. This meaning appears in a number of works of literature: for example, in Shakespeare’s Hamlet.

When the Mither Kirk Project was starting, we were anxious to adopt a symbol which would convey something of our objective: the giving of the building to create a space for everyone to use in the heart of Aberdeen. The ‘Mither Kirk’ of St Nicholas has been at the centre of life in Aberdeen for at least 900 years – mothering and protecting. Within the Kirk building there are many examples of the use of the pelican symbol in stone, metal and on wood. Thus the use of the pelican as an appropriate symbol for the project developed. 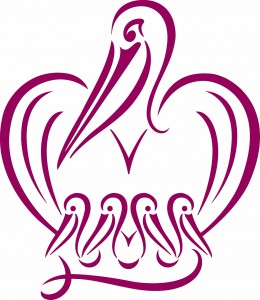 As depicted in our logo, it incorporates the idea of the sacrificial giving of the mother pelican, with the wings acting as a protection for the chicks, whilst also making a heart shape, indicating an ongoing care for the people of this city.