St Mary’s Chapel was originally built as a separate building around the middle of the 1400s, with the intention that it would be used to support the church as it was extended eastwards over the valley of the Putachie Burn later that century. It was built with a stone vaulted ceiling. In such buildings where each rib of the vault reaches a pillar it is supported by a corbel which is keyed into the stonework to give it strength. 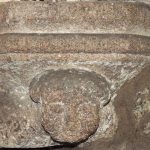 The word corbel is derived from the Old French for ‘raven’, presumably referring to its shape being similar to a bird’s beak. 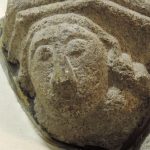 Using corbels goes back to Neolithic times, for example Maeshowe on Orkney is built by corbelling the flat stones. By the Middle Ages carving the protruding stone of the corbel had become fairly popular. So it is not surprising that the corbels in St Mary’s Chapel have carved decorations. Apart from classical scroll shapes, common themes for the carvings include faces, animals and imaginary ‘beasts’. In many older churches, corbels depicted whole or nearly whole people, some doing ‘strange’ things or being grossly distorted. 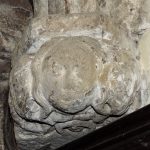 However, by far the commonest carving in St Mary’s is a stylised human face – but some of them are quite ‘crude’, whilst others are more realistic. All of them are different. Why this should be the case is open to some debate, but one suggestion is that each one may have been created by a different person. 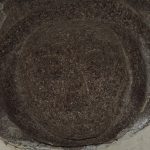 At the time the chapel was built the ability to carve granite was still being developed so some of them may still have been learning their craft. Whatever the reason, the photographs show some of 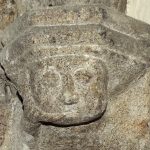 the different faces to be seen staring back from the walls in St Mary’s Chapel. One of them appears to be a ‘green man’ with the head surrounded by leaves and on another there appears to be a hand below the chin. It should be noted that there is very little relief on some of the faces, 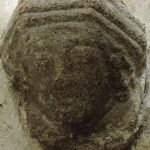 so they are better appreciated ‘in the flesh’ than in photographs.