The OpenSpace Trust wishes all our followers a very Happy Christmas and a successful New Year. 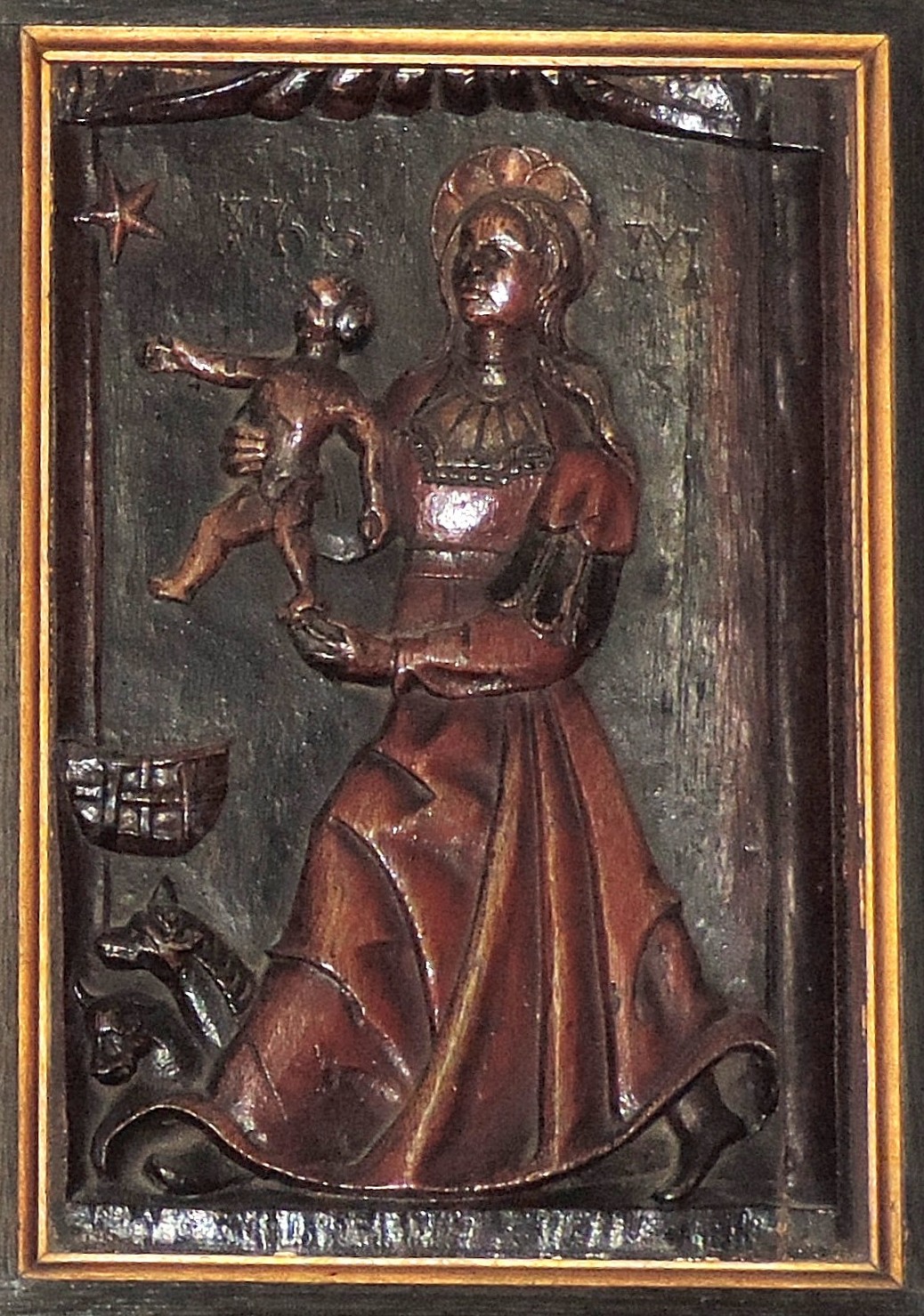 This picture shows one of four carved wood panels in the West Kirk of St Nicholas. It shows Mary and the baby Jesus. The letters carved are IHS – the first three letters of Jesus in Greek – and M, indicating Mary. The style of the carving is European and suggests an early date. It is thought that they date back to mediaeval times, perhaps carved in Germany, but nothing is known for certain about their history.

Friday 6th July 2018 marks the 30th anniversary of the Piper Alpha disaster. On that fateful night the Piper Alpha rig exploded and caught fire killing a total of 167 men. No-one who was in Aberdeen at the time will forget that day nor the subsequent days. It is fitting that various memorials have been created for those who lost their lives. The Piper Alpha Memorial Garden is in Hazlehead Park where an Act of Remembrance will take place at 7 pm on 6th July. There is also a beautiful Piper Alpha memorial window in Ferryhill Parish Church.

At the time of the disaster the ‘Oil Chapel’ was being planned by the oil industry to mark the first 25 years of North Sea oil. This is in the Kirk of St Nicholas and naturally its design was influenced by these events. In particular the furniture, designed and built by Borders craftsman Tim Stead, features strips of native Scottish trees, the initials of which spell out ‘We Remember Yew’. This can be seen, for example, in the backs of the chairs (first photograph). Also in the Oil Chapel is a desk housing a book with the names of all those who lost their life. This is shown in the second photograph. The Chapel can be visited any weekday afternoon (between 12 noon and 4 pm) until the end of September in the Kirk of St Nicholas – entry by the main door facing Union Street.

Also available is a notelet showing a chair, as shown in the third photograph. In the chapel’s stained glass window there are red (oil) and green (gas) ‘lenses’ representing various fields in the North Sea. There is also one clear glass lens commemorating the Piper Alpha field.

We will remember them.

One of the most noticeable features in St Mary’s Chapel is the carved wood panels around the walls – the largest such assemblage in the country.  Previously we have featured the wood from the choir stalls (by John Fendour in 1508) and the panel for Provost Alexander Rutherford (dated 1606). Around the walls are dozens of wood panels of different size and complexity of carving. Some panels are dated, the earliest being 1601 and the latest being 1677. Where did they come from?

After the Reformation, for which 1560 was the decisive year in Scotland, sermons became a more central and lengthy feature of worship.  Seating, which was unusual in the middle ages, became very desirable.  Wealthy people and public bodies began to be given permission to erect ‘desks’ or ‘lofts’ with seating, while the less well-to-do and women had to stand, or bring their own stools.

People who had gone to the extent of paying to build a desk wished to mark it as theirs by having the ends, the seat backs, or the gallery breasts carved with a name, family crest, trade symbol or some other identifying motif. Some of these were quite elaborate, were often coloured, and display the skilled craftsmanship available locally. The first photographs show the outside and inside of one of these panels, the latter carved in the upper part, and the ledge for the seat to rest on.

When the churches ‘upstairs’ were changed, the carved wood was no longer required for its original purpose. Some was transferred to Greyfriars Church, some was auctioned and some was stored and later incorporated into the pews built in St Mary’s Chapel. The picture of the Chapel (taken from an old photograph) from the apse end, is from the later 1800s and shows the carved wood as used in this way.

During the 1890s, it was decided to restructure the interior of St Mary’s Chapel, the work being completed in 1898. It was felt that the existing arrangement did not do justice to the quality and interest of the wood, so the panels were arranged round the walls in their present day positions. The next photograph is of an area of wall in the north aisle, although unfortunately this wood had to be removed due to outbreaks of dry rot. It is currently stored in a specially built rack to prevent it warping as the building dries out as shown in the final photograph.

Several articles have been written about this woodwork, to interpret its meaning and identify those to whom it relates, but much remains to be done. We hope to be able to provide more detail in the future. 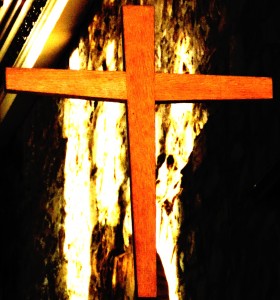 Easter Day is when Christians celebrate the resurrection of Jesus. They often greet each other that day with ‘Christ is Risen, He is risen indeed’. The resurrection is the foundation of the Christian faith, showing as it does the divine in Jesus, that he is the Son of God. Christians believe that through his death and resurrection, despite all that we do wrong, we can be reconciled with God.

Depiction of the resurrection is not as easy as for the crucifixion. Symbolically Jesus is often depicted as the Paschal Lamb, from the Old Testament practice of animal sacrifice as atonement for sin. In the non-conformist churches an empty cross is often used, as in this photograph taken in St John’s Chapel (the ‘Oil Chapel’) in the Kirk of St Nicholas.

John Fendour was a master wood carver of Flemish origin. Around 1500 he was renowned as one of the best wood carvers in the world. Aberdeen is fortunate that he was active at two churches – King’s College Chapel and St Nicholas Church. According to the records of the day, it was in 1495 that John Fendour was employed to work on the building work involved in expanding St Nicholas Church to make it one of the largest parish churches in Scotland. Initially he worked on the ceiling. Whilst the building was dedicated in 1498, the ceiling was not finally finished until 1515. In the intervening years he also worked on the choir stalls and he was also working on King’s College Chapel and Falkland Palace in Fife. Unfortunately, the east end of the building was  demolished in 1835 to make way for the present building. As a result, the ceiling and most of the woodwork was lost. However  a few years before it was demolished the ceiling was described as a ‘timber wagon roof, decorated with slender cross ribs, foliate sprays and an ornamental cornice’. John Fendour was commissioned to work on King’s College when building work started there in 1500. It is, therefore, not surprising that scholarship has established that the work at King’s College and St Nicholas Church were of a similar style, and indeed were influenced by styles used in a number of churches in the Netherlands. Thus, whilst we cannot know exactly what the stalls and ceiling in St Nicholas Church looked like, surviving pieces of the former and drawings of the latter together with those still visible in King’s College Chapel give a good indication of their appearance.

The most substantial part of John Fendour’s work surviving in St Nicholas Church is the long desk at the west end of St Mary’s Chapel  (shown in the first photograph) with seven panels on the front and one on either end.

One similar panel has been incorporated in a Victorian reading desk and others in furniture made for the 1937 refurbishment of the East Church. Upper parts of the choir stalls are in the National Museum of Scotland. Other panels were incorporated into the Deacon Convener’s Chair of the Incorporated Trades of Aberdeen. The second photographs shows one of the panels in closer detail. The carving was carried out in 1508.